After resisting the policy of forced assimilation enforced during the decades of military rule, today Indigenous peoples of Myanmar are subjected to land dispossession in the name of boosting economic development and implementation of the country’s climate commitments.

Myanmar, formerly known as Burma, is home to 54 million people, including more than 135 ethnic groups and Indigenous Peoples. Myanmar is thus considered to be one of the most ethnically diverse countries in Southeast Asia. The government of Myanmar groups the country’s diverse population into eight national races: Bamar, Chin, Kachin, Kayin, Kayah, Mon, Rakhine and Shan. Of these eight, Bamar (also known as Burmese or Burmans) represent the majority of the population and dominate the country’s politics and economy. Since many Indigenous Peoples do not see themselves as belonging to any of the officially recognised eight races, this classification is seen as government-imposed and not recognised by many in Myanmar Indigenous activist community.

Myanmar voted in favour of the United Nations Declaration on the Rights of Indigenous Peoples (UNDRIP) in 2007; however, as of yet the government has failed to develop a national action plan and incorporate it into its legal system. Myanmar did not ratify ILO Convention 169.

Myanmar gained its independence from Great Britain in 1948 with crucial support from Indigenous Peoples – mainly the Kachin, Chin and Shan – which was secured through the Panglong Agreement. The agreement, signed in 1947 by the leaders of the Burmese independence movement and representatives of Shan, Kachin and Chin Indigenous Peoples, outlined the federal structure of the new nation and guarantees to the many peoples inhabiting it. However, soon after independence, it became clear that politicians representing the ethnic majority were not inclined to respect the provisions of the agreement and promises given to the Indigenous Peoples. As a result, the country has descended into a civil war that, with various degrees of intensity, continues to this day.

The 1962 military coup has marked the beginning of a half-century-long military rule that was accompanied by the forced “Burmanisation” (assimilation) of the country´s many Indigenous Peoples through the so-called “one religion, one culture, one language and one identity” policy. Unsurprisingly, such blatant disrespect of the country´s cultural diversity resulted in even more ethnic groups joining the armed struggle for self-determination. At some point, there were around two dozen active armed ethnic opposition groups fighting government forces in Myanmar.

In response the military instilled a true reign of terror in the country’s frontier areas through its infamous four cuts counterinsurgency tactic that fell especially heavy on Indigenous Peoples. The civilian population residing in conflict-affected areas was subjected to massive displacements, forced labour and violence, including sexual violence and torture. It wasn’t until the first years of the new millennium that the military government started to engage in ceasefire negotiations with some of the armed groups.

After much political campaigning and pressure from the international community, a quasi-civil government was installed in 2010 under the military-crafted 2008 constitution.

Parliamentary elections brought to the legislature a number of ethnic political parties and so, for the first time in decades, Indigenous Peoples had their political representation at the national level.

However, a new government didn’t mean the full retreat of Myanmar’s military. The new constitution reserved a quarter of the seats in national and regional parliaments for military personnel who, in turn, elects one of the two vice-presidents. Moreover, three key ministers – Home Affairs, Defence and Border Affairs – who are serving military officers are appointed by the Army´s Commander in Chief. In such a structure, Myanmar’s president Win Myint and state counselor Aung San Suu Kyi have only very limited control over Myanmar’s security forces.

The tensions between the civil and military branches of the government are very visible and the military’s sabotage of the government’s peace-building initiatives in the country’s restive Indigenous regions is rather obvious. The militarisation of many areas inhabited by Indigenous Peoples continues to this day and in some parts of the country violent confrontations between ethnic armed groups and government forces still occur on a regular basis. Thus, despite obvious improvements in terms of political freedoms, the military, which singlehandedly ruled Myanmar since 1962, continues to hold the keys to stability and peace in the country.

The transition to the quasi-civil government was much applauded by the international community and as a result economic sanctions that were in place for decades were lifted. Myanmar opened its doors for international business and foreign investments started to pour in, with investors comfortably overlooking largely unchanged corrupt practices dominating business relations in the country.

Ever since the 1962 military coup, Myanmar’s military forces were a key economic player in the country, directly managing plantations, mines and other large-scale enterprises. While economic reforms in past decades have allowed some space for private entrepreneurial initiatives, the military maintains its position in the country’s economy both through formal and informal practices. Among others, the defense forces and its top brass on an individual basis have their interests in large-scale agricultural and agroforestry enterprises, banking and mining. A number of Myanmar’s richest people either have a military background or are linked to the military. The role and interest of the military in both the economic and political sectors remains one of the major obstacles in reform processes in Myanmar.

In 2012, the parliament, then controlled by the pro-military Union Solidarity and Development Party (USDP), hastily passed a series of new laws intended to facilitate foreign investments. These laws included the Vacant, Fallow and Virgin Lands Management Law (VFV Law), Farmland Laws, Investment Law and Forest Law. Since these too failed to recognise Indigenous land management systems and collective land ownership, these laws made Indigenous lands ownerless and became a legitimate tool for land grabbing. During the era of the military government, Myanmar’s authorities practically didn’t need any justification to dispossess entire communities of their land; with the introduction of these laws, such a practice has been effectively written into law.

The potential impact of the law on Indigenous communities can be illustrated by the fact that the government has reportedly estimated that of the 45 million acres of land that would qualify as VFV land, 82 percent is in ethnic nationality states.

Forty-one Karenni Indigenous farmers in Kayah state in December 2019, were sued for criminal trespassing for reclaiming their lands that were confiscated by the military in 1990. In June 2020 a similar story happened in southern Shan state where the military destroyed 770 hectares of crops planted by the Pa’O Indigenous community, seized expensive agricultural equipment and sued 30 farmers for criminal trespassing, despite the fact that the community has been cultivating these lands for the past three decades. Similar stories are all too common in areas inhabited by Indigenous Peoples in Myanmar.

The VFV Law was amended in 2016 after the National League for Democracy (NLD) came to power. However, this amendment didn’t improve the situation of Indigenous land users. Not only did the new version again fail to recognise Indigenous land ownership systems, but it also kept the provisions that were used to criminalise Indigenous Peoples unchanged.

As an example, in 2018, a group of Indigenous farmers in Thanintharyi region applied to register the land they have been using for two decades in accordance with the new laws. Instead of approving the application, authorities accused them of trespassing. Attempts to challenge the case against the community were unsuccessful.

Legal initiatives designed to foster economic development and attract foreign investments are not the only root causes of land dispossession in Myanmar. Climate and conservation initiatives often also result in the violation of Indigenous Peoples’ land rights in Myanmar.

Myanmar’s international commitments to climate change mitigation and international environmental protection mechanisms have been misused by the government as tools to justify existing initiatives and legitimise what has been unjustly and unfairly done in the past.

For instance, as part of the Nationally Determined Contributions under the Paris Agreement, Myanmar commits that 40 per cent of the total geographical area will be conserved forest of which several areas have been taken from Indigenous communities. Among these are the Htamanthi Wildlife Sanctuary and Hukaung Valley Wildlife Sanctuary that were created with the support of the Wildlife Conservation Society (WCS) and included lands occupied by Indigenous Peoples without their Free, Prior and Informed Consent (FPIC). As a result, more than 50,000 Indigenous households of Naga, Kachin, Lisu and Red-Shan Peoples become illegal dwellers on their own land.

The practice of the government or investors making plans for Indigenous Peoples’ lands – be it large infrastructure developments, large scale agroforestry projects or conservation initiatives – continues today; just like it did before the arrival of the new, supposedly civilian government. In some areas, Indigenous community members are uniting and successfully protesting activities on their land. For example, in 2019, after three years of struggle, the Shwe Taung Ngwe Taung village populated by the Karen people in the Bago region managed to halt the expansion of teak plantations on their land.

Unfortunately, not all stories are as successful. Many investors employ the “divide and rule” tactic to weaken communities in their struggle against invaders. By offering low-paid, temporary jobs to a small number of community members companies create divisions in the community and later use these divisions to claim that protesters represent a minority, albeit a loud one. For example, in 2018, the Wunn Pyae mining company sued community members from the Southern Shan State for staging a protest against its mining project on community land. The company used some of the members from the community itself to take legal action against the protesters for trespassing and obstruction of the project[1]. 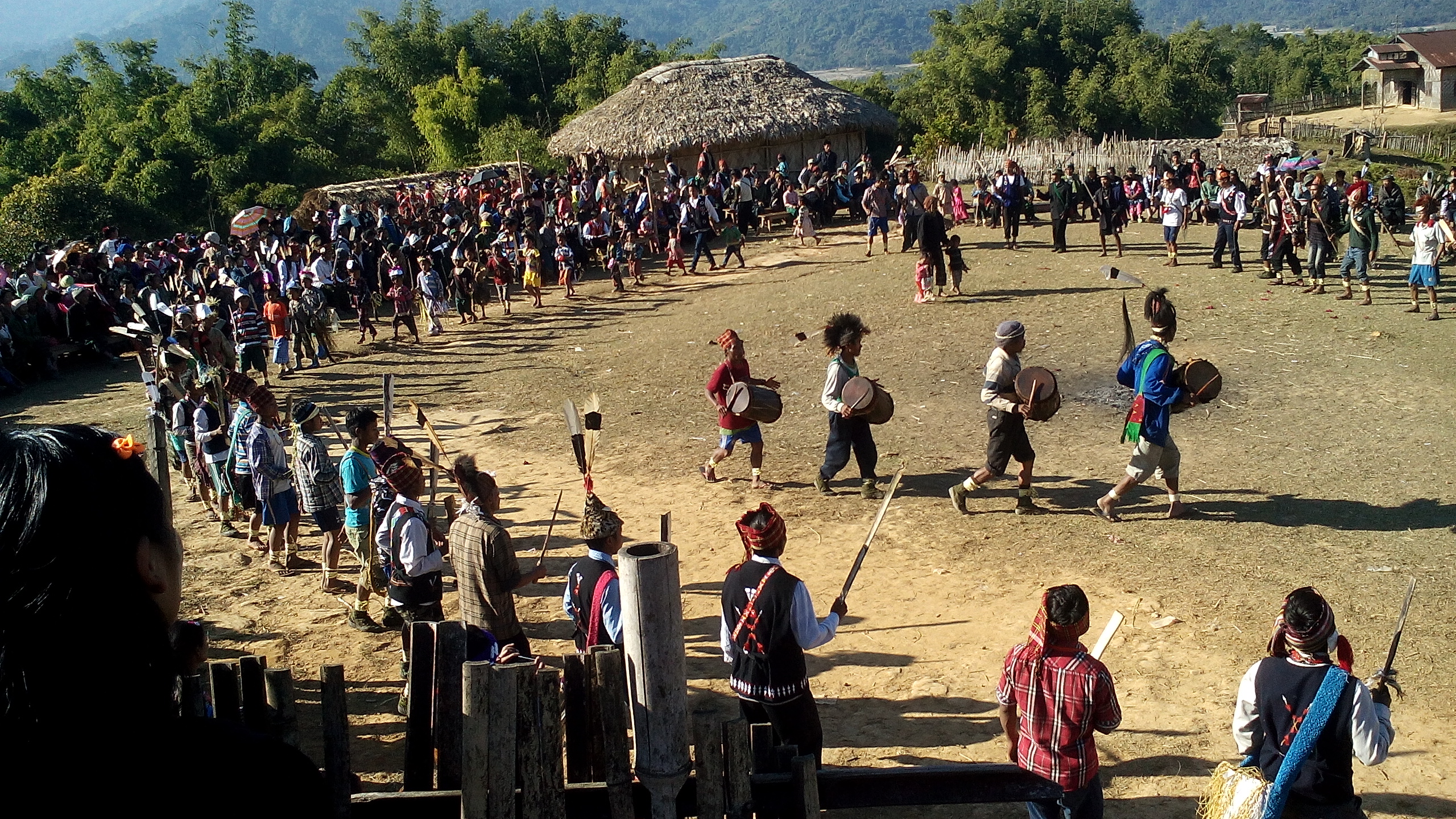 Indigenous Peoples in Myanmar continue their efforts to strengthen Indigenous customary governance systems through customary land use documentation and mapping. It will be crucial for people in Myanmar to recognise Indigenous Peoples’ rights to land, territories and natural resources in the upcoming National Land Law, which is currently in the drafting process.

The political transition and reforms of the past decades in Myanmar have been carried out without addressing the root causes of discrimination against Indigenous Peoples, continued omnipresence of military in all aspects of life in the country and widespread corruption. Lack of justice and trust deficit pose additional challenges to achieving genuine change in Myanmar. It is important to ensure transparency and active citizen participation in the process of designing the policies and laws for a new democratic Myanmar to prevent the victimisation of peoples in the course of reform.

Debates Indígenas (Indigenous Debates) is a digital magazine which aims to address the struggles, achievements and issues of the indigenous peoples in a perspective from within the territories and the communities themselves, with academic knowledge and activist engagement. Our vision is to become a communications medium of reference for indigenous peoples, as well as an instrument that contributes to the defence of human rights and nature.

[1] Joint submission to the UN Universal Periodic Review of Myanmar by an alliance of Indigenous organizations, March 2020. Unpublished. Available upon request at This email address is being protected from spambots. You need JavaScript enabled to view it.

Nikita Bulanin is an Indigenous Peoples’ rights activist and a team member of the International Work Group for Indigenous Affairs.

Debates Indígenas (Indigenous Debates) is a digital magazine that aims to address the struggles, achievements and issues of Indigenous Peoples with contributions from academia and activist engagement and a perspective from within the territories and communities. Debates Indígenas aspires to become a communications medium of reference for Indigenous Peoples as well as an instrument that contributes to the defence of human rights and nature.