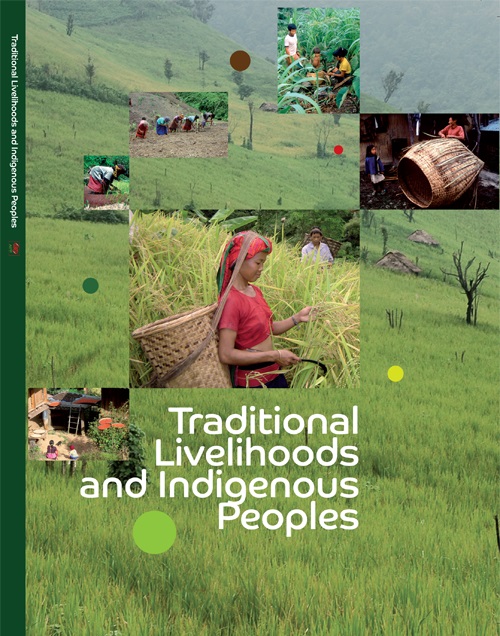 Number of pages: 166
Region publication is about: Asia
Release year: 2010
This book reflects on the outcomes of the workshop on traditional occupations organized by AIPP, in partnership with UNDP-RIPP and ILO, together with the Ministry of Rural Development of the Royal Government of Cambodia. It compiles case studies aimed at looking deeper into the specific concerns and challenges relating to the practice of traditional livelihoods, specifically in Asia. It is divided in three parts: 1) Traditional Occupation, Food Security and Impacts of the Climate Changes (Bangladesh, Thailand and Viet Nam), 2) Traditional Occupations and Livelihoods (NE India, Malaysia, Philippines and Cambodia) and 3)a summary report of the Cambodia workshop . Key issues, challenges and recommendations on the practice of traditional livelihoods. Bangladesh: Chittagong Hill Tracts The case study from Bangladesh highlights the traditional shifting cultivation in Chittagong Hill Tracts (CHT) which is an integrated farming system of agriculture and forestry, fish culture, domestic and wild life rearing. This traditional livelihood practice has contributed to regeneration of forests and soil fertility, conservation of biodiversity and watersheds, and protection of the environment. This study also discusses the effects of climate change and global warming in Bangladesh evidenced by increasing occurrences of cyclones, floods and other destructive natural calamities which is greatly impacting in Indigenous Peoples territories. Vietnam: Rotational farming Vietnam paper focuses on the situation of rotational farming which not only provides food security for ethnic groups in mountainous areas but also to conserves IPs knowledge in farming and traditional seeds that produces diverse in gene resources and conserves the IP traditional culture. This rotational farming is closely related to the ancestral worship through the practice of rituals using rice, chicken, and pig all in line with their cultivation periods which remain unchanged till date. Further, it also elaborates on the REDD programme where the shifting cultivation and rotational farming should be included in the programme and policy for IPs in particular as part of the conservation of customary laws and traditional knowledgein the REDD implementation at the local level. Northeast India: cultivation in Ukhrul NE India study focuses on the shifting cultivation in Ukhrul district, Manipur state specifically on how the forests, rangelands and farming systems are managed collectively by the community. It focuses on the biodiversity conservation which produced many kinds of foods, maintained collective efforts and ensured social security, observation of traditional norms and practices, addressed equity in resource allocation. Land and forest resources are often collectively owned and utilized to meet individual and collective needs in this area. The study discusses the challenges of ethno nationalism and armed conflict situation in the region, the lack of market linkages, land alienation and loss of forest areas, state policies erosion of the roles of traditional institutions, tapping market value in potential niche crops. Malasya: herbal healing The study shares the practice of herbal healing where the community people are very strong in herbal medicine, and the community forest is one of their sources for this. The traditional knowledge on herbal healing is practiced by only a few these days due to lack of traditional knowledge transfer to the young generations from the healers who are knowledgeable in the communities. Philippines: Indigenous women Philippines study focuses on the roles of indigenous women in traditional livelihoods. Indigenous women in the Philippines are very much a part of the traditional subsistence agriculture in their communities and play a major and critical Traditional Livelihoods and Indigenous Peoples 11 role in traditional agricultural production. This study shares the traditional skills and knowledge of women in IP farming systems, responsibility of nurturing the land, resources and culture that they pass on to the next generations such as the traditional healing practices, and also assist in conflict resolution within their own communities as well as to other communities. The role of IP women in agricultural production is inadequately recognized and appreciated though. Further, the non-recognition of IP women weavers as workers in the informal economy denies them those rights to fair wages and benefits for their labour. Cambodia: sustainable forest management Cambodia paper shares the sustainable forest management and market access support through maintaining forest resources, legal recognition of the community boundaries, access to the finance, capacity to meet the market demands, and access to the long-term market system. This study highlights the honey project of the IPs in Mondulkiri province which is located in the Northeast of Cambodia with the 1.5 million hectares of surface. This publication has been published with the support from IWGIA and others.
Download publication